gbSand is a standalone version of the popular web-based Falling Sand games. The web versions have generally been written in Java and are run in a browser. gbSand is written in PowerBASIC and is run as a standalone EXE (no browser required).

The basic Falling Sand game typically consists of one or more streams of falling particles, such as sand, oil, and water. The various particles are assigned properties which describe how the particles may fall or interact with each other. Barriers may be generated by the user, directing the paths by which particles may fall and/or merge with of particles streams. Particles which reach the bottom of the screen are typically discarded from the game.

While gbSand can be played by simply running the game and playing with the various controls and settings, there are a number of features available which enable the user to design (and save) game backgrounds for use in subsequent games. By default, gbSand opens with 4 particle streams and a barrier for each particles. Users can modify the numbers of streams/barriers, import barriers from external files, and edit the screen content directly - more editing features than any other falling sand game! 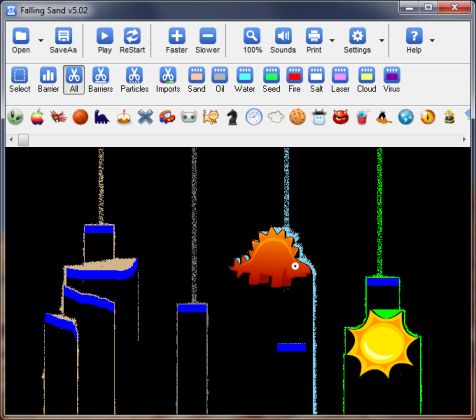 gbSand uses a single main window, consisting of three toolbars and a client area where the game is displayed. Default particle streams enter from the top of the screen. Particle paths are directed by the user by placing barriers (manually drawn or imported from external files) in the path of the falling particles.

Aside from basic start/stop and faster/slower commands, there are 5 basic actions a user takes in playing gbSand. These are provided in the middle and bottom gbSand toolbars:

By default, gbSand provide four streams of falling particles, one for each supported particle type of sand, oil, water, and seed. Also by default, a barrier is placed in each stream to deflect the particle flow. The defaults are just to demonstrate how the game works to the user. The user may remove the default barriers and particle flows.

Users may create new barriers by dragging on the screen with the mouse. Likewise, particle streams (spouts) may be removed or added. Added particle streams may be placed anywhere on the game screen.

Approximately 100 images, suitable for import (PNG files with black as transparent color), are distributed with gbSand. A separate toolbar is provided which displays all images found in the images subfolder where gbSand has been installed. You can import any image, but those with perimeter transparency tend to give better results. The supplied images are generally just colorful, humorous images - but the user can make custom images, such as a barrier which resembles a maze, which may be used in multiple games. The use of imported barriers is limited only by the users imagination!

The game may be paused and play resumed. A new game may also be started at any time. Games may be saved and opened later. The game speed (rate at which particles fall) can be controlled. The game status in a sessions is automatically saved and restored the next time gbSand is started.

Sound effects are available for each of the user actions (Drawing, Erase, Spouts, Import).

A screen context menu is available, providing various options for controlling the content of the game. A zoom context menu item allows the user to take a closer view of any part of the screen (displayed in a separate dialog). Game images may be saved to the clipboard or printed to a user-defined printer.

The user can select any portion of the screen, after which a separate context menu is presented, allowing the user to copy or selective erase content within the selection.

Action Toolbar (Middle)
The middle toolbar provides all of the mouse actions a user may take.

Import Barrier Toolbar (bottom)
Thumbnails of all barrier files, located in the images subfolder where gbSand was installed, are shown on this toolbar. To import a barrier file, just select the image on the toolbar and then double-click on the game screen where you want the imported barrier to be centered.

After making a selection on the game screen, the following context menu is displayed: 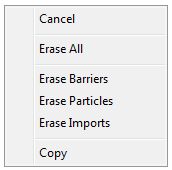 A context menu is available from the main screen, and provides these menu items: 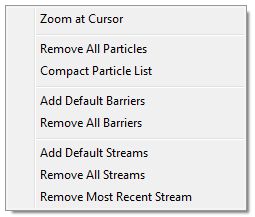 The following key combinations are available to the user to access gbSand features:

gbSand has the option to play a sound effect for each user action - draw, erase, spout and import.

In future versions, additional sound effects will be available, corresponding to particle interactions.