gbUnSnarl is an addictive game, where the object is to move circles until all connecting lines are blue, meaning there are no overlapping lines! The rules are quite simple but you'll find that playing the game can require some thought to win! Three levels of difficulty - Easy, Medium and Hard - are available.

To put gbUnSnarl on your PC, just download the file above and unzip it into a folder of your choice.

I'd like to give special thanks to Rod Stephens (VB-Helper) and Rodney Hicks for their suggestions and help in testing gbUnSnarl. Additionally, the function used by gbUnSnarl to detect line segment overlaps is based on code from Rod's VB-Helper website. 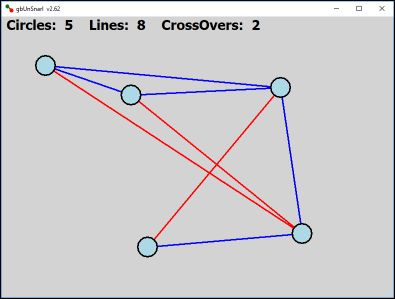 Here's an image of a Graph and its solution:

Here are some of the most useful gbUnSnarl features. See the context menu section below for a full listing of features and settings.

If you play the game and have suggestions for new features, please let me know!

When gbUnSnarl starts, a new game is automatically generated at the current difficulty settings. Play consists of moving the circles by dragging them with a mouse until all connecting lines are blue (no overlaps). That is called "solving" the game.

gbUnSnarl will acknowledge when a game is solved.

gbUnSnarl has just one window where the circles and connecting lines are dispalyed. All settings and available actions can be seen by right-clicking on the application to display the context menu.

The gbUnSnarl window can be set to show or hide a variety of content - information to help the user better solve and enjoy the game.

Here's an image of gbUnSnarl displaying all optional content: 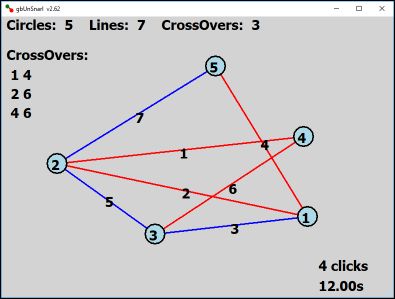 During play, gbUnSnarl may display temporary messages in the lower left hand corner of the window.

Right-click on gbUnSnarl to display the context menu, from which all settings and actions may be accessed.

Here's a description of what each context menu item does:

Notes:
Startup: When gbUnSnarl starts, it creates a new game at the current level of play.

Levels: The Easy, Medium and Hard levels of play contain different numbers of circles and lines.

AutoSolve: gbUnSnarl will solve the Graph if you wish. It animates the circles, moving them to positions that solve the Graph. Because of the way in which the Graph is solved, it is possible that the animation will pass through other Graph solutions before settling on a final solution.

Stats: The "CrossOvers" statistic changes real-time as you drag circles to new locations.

CrossOver List: The optional CrossOver list consists of pairs of numbers, corresponding to the numbers assigned to line segments.

Small Font: The small font option is provided to ensure that the CrossOver list can be viewed in its entirety during Hard levels of difficulty.

Celebration: When the user solves the graph, the gbUnSnarl celebration consists of a clarion sound and a voice congratulating the user.

Hide Circles: The Hide Circle feature is provide simply to allow users to see points of line segment overlaps that might otherwise be hidded by the size of the circles.

AutoSave: AutoSave is provided as a debug option for users. If a user experience a problem during a game, enable AutoSave will ensure that a set of game files are saved before the problem occurs and shared with the gbUnSnarl author if appropriate.

Save Game: Only 1 saved game is allowed. Saving a game writes over the previously saved game. When a game is saved, the click count and elapsed time are also saved.

The following key combinations are available to the user to access gbUnSnarl features:

There's an entire branch of mathematics that covers Graphs, which for our purposes consist of circles and connecting line segments.

A planar Graph is one in which no line segments overlap.

There are algorithms which can be used to determine if a Graph is planar. Those are generally considered quite difficult to implement and are not used by gbUnSnarl. Instead gbUnSnarl takes a non-algorithmic, brute force approach to creating Graphs to solve.

For each new game, gbUnSnarl creates a planar graph by first placing a random number of circles on the Graph. It then adds lines between randomly selected circle pairs. If a newly added line overlaps an existing line, the new line is removed and the process repeats. gbUnSnarl may go through thousands of new line additions/removals in order to reach the assigned level of difficulty.

Once the planar graph is completed, the Graph is saved in memory and used as the basis for the Solve feature. The circles of the planar graph are then randomly re-positioned to create the Graph (with over-lapping line segments) that is displayed to the user.

INI File
gbUnSnarl application settings are saved in an INI file, kept in the same folder as the application itself.

UnInstall
To uninstall gbUnSnarl, just delete the folder in which the files were installed.