gbBlocks3D displays rectangular objects in 3D format. It's intended use is as a utility application, providing simplistic 3D display capability for applications which do not have the capability themselves.

When started with a file name as a command line argument, gbBlocks3D will open the file, read the list of blocks (see format below) and display the results.

The display supports spin, zoom, translatation and various color schemes, The display can be shown as points, lines, or surfaces. The imported list can be edited and saved within gbBlocks3D.

gbBlocks3D also acts as a stand alone application, allowing the user to type in a list of blocks and display the resulting 3D image. The manually generated block list may be also be saved for later editing/vieweing.

This first screenshot shows a scene consisting of a base block, on which 4 additinal blocks have been placed. 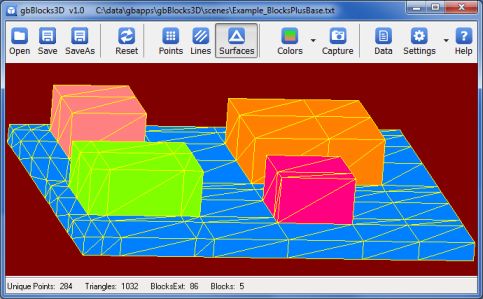 In this next screenshot, the base has been removed. 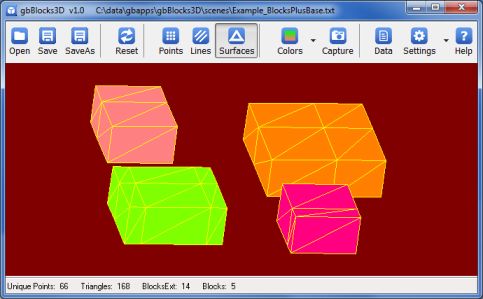 And in this screenshot, the blocks are shown at different height from one another. 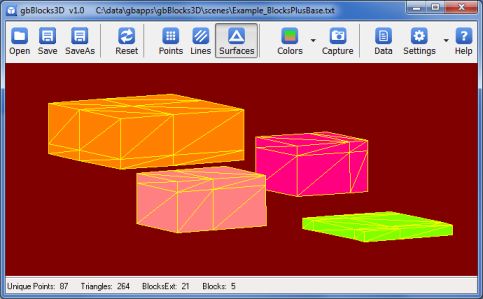 gbBlocks3D uses a single main window, consisting of a toolbars and an image display area. The scene data may optionally be displayed.

gbBlocks3D provides the following features, allowing it to provide 3D dislays for other applications, or to act as a standalone 3D editing/viewing application.

The scene data, as read from a scene file, can be viewed (optional) as shown on the left in this image. The data can be edited and then it's contents applied to update the 3D display. The edits can also be saved as the currently opened file.

Sessions are not saved! When gbBlocks3D closes, or when a new file is opened, any unsaved changes to the scene data will be lost! 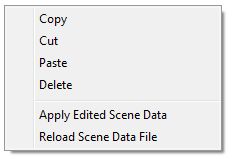 gbBlocks3D can open ascii and binary stereolithography files. Here's an example of a "Trek" STLA file opened in gbBlocks3D. 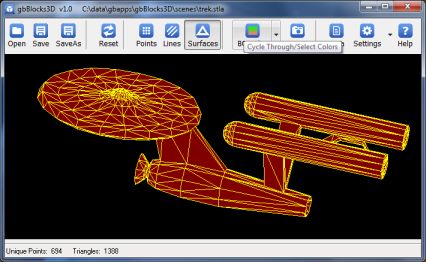 The following key combinations are available to the user to access gbBlocks3D features: