gbEncrypt is an extremely simple freeware application for entering and saving text. Encryption of the saved text files is supported. Standard text files are supported, as well as encrypted files saved by gbEncrypt.

gbEncrypt uses a single main screen, consisting of a toolbar and an edit control. 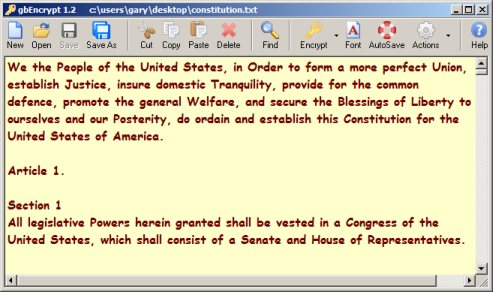 That's it. When gbEncrypt is opened, it automatically opens the file it was editing in the last session. Note that if encryption is enabled, a password will be required to save a file. Each file can have its own password, which must be entered before a file can be opened.

gbEncrypt can detect whether a file is encrypted and when an encrypted file is selected to be opened, the user will be asked to supply the password associated with that file.

Almost all of the commands and settings available in gbEncrypt are accessed through the toolbar buttons. Normally, the toolbar consists of the following buttons. However, the toolbar can be toggled between ful width and a "minimal" width using the Ctl-M keyboard shortcut. Ctl-M hides those commands which are also available via context menus, allowing for a smaller gbEncrypt window footprint.

New
Creates a new file. Unless AutoSave is on, requests permission to save changes to the current file. If changes are saved and encrypt is enabled, the user must supply a password.

Open
Opens an existing file. Unless AutoSave is on, requests permission to save changes to the current file. If changes are saved and encrypt is enabled, the user must supply a password.

The Open File dialog opens in the folder of the currently opened file.

Existing files may also be opened by dragging them to the gbEncrpt EXE icon or shortcut icon.

Save
Saves the current file without prompting for user approval to save changes. If changes are saved and encrypt is enabled, the user must supply a password. If the currently opened file has been changed by the user, the Save icon on the toolbar is grayed out.

The Save As file dialog opens in the folder of the currently opened file.

SaveAs
Saves the current file under a new name.

Cut/Copy/Paste/Delete
Standard windows commands for editing the content of the textbox.

Encrypt
Toggles whether encryption will be applied when the file is saved. The dropdown menu attached to the encrypt toolbar button also provides the following options which define the criteria used to validate a password used to save a file.

All of these options are off by default.

AutoSave
Toggles whether changes are automatically saved when the user exits from gbEncrypt. Even if AutoSave is enabled, if Encrypt is enabled, the user must enter a password for the file to be saved.

Actions
Provides a dropdown menu with the following options:

gbEncrypt can Open standard, unencrypted text files. When unencrypted files are Saved, they are saved with no modification to the content - just as with any other text editor.

Misecellaneous information is provided in this section.

Sessions
When gbEncrypt starts, it opens the file it was editing in the last session. The gbEncrypt window size and position are also restored.

Password Entry
When entering a password needed to open or save a file, gbEncrypt does not limit the number of times a password may be entered.

New File
New files are given a name such as "default_001.txt". gbEncrypt looks in the path of the currently opened file and finds the first available number (i.e., 001, 002, ...) to assign to the new file name.

New files are, by default, unencrypted. If New is executed, the Encrypt toolbar button will be released.

If New/Open are executed and the current file has been changed and Encrypt is on, the user MUST enter a password or the New/Open operation is aborted.

Encryption Effect on Changes Flag
Changing the Encrypt toolbar button sets the "Changes" flag, indicating to gbEncrypt that the file content has changed.

Encrypt Speed
In the PowerBASIC forums I created a thread that discussed various encryption routines, focussing on speed of encryption. For gbEncrypt I used a medium speed encryption algorithm just to keep the routine simple. See the forum thread if faster Save/Open speeds are critical to you.

Save
When Saving an encrypted file, which requires a password, failure to provide the password will abort the Save operation. This includes a Save that is required (when changes have been made to the current file) before Opening a new file, Opening an existing file, performing a SaveAs operation, or exiting the application.

CFN
In the source code and possibly in the Help file, you'll see the letters CFN. This stands for the "Current File Name" - the file being viewed in gbEncrypt.

Programmer Comments
The code for New/Open and to exit from gbEncrypt are very similar. I could have combined the code for those three actions, but decided it was easier to debug/maintain if I kept the code separate for each.