gbGameTimer is a time and score keeping application to be used by two players when playing games of sport. Baseball, basketball, football, hockey and soccer are currently supported. gbGameTimer provides a very colorful visual interface designed to help keep the interest of children, while also teaching them simple facts about the supported sports.

Many of gbGameTimer's features were specifically asked for by my 5 year old grandson!

Here's an image of gbGameTimer. It consists of a toolbar for controlling the game, two player frames (which contain customized information about the players and their game scores), horizontal listings of available face/team images, and a graphical countdown image at the bottom of the page (the sport image moves across the page and a numerical countdown is displayed). 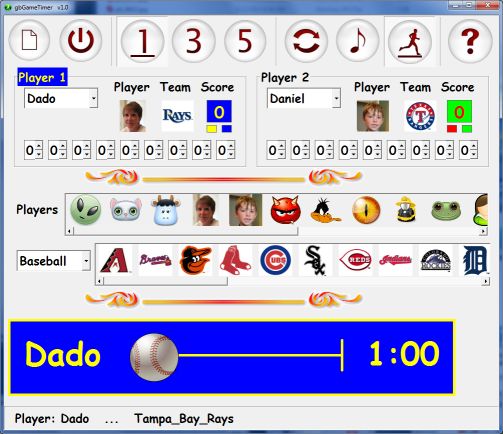 Display of the face/team image lists is optional. The current player information is displayed in the statusbar along the bottom of the screen.

Key features of gbGameTimer include:

gbGameTimer is used by two players who are competing against one another in a sporting game. The rules of the game are up to the players. gbGameTimer just provides a colorful/graphic way to display progress of the game (player information, game times and scores). gbGameTimer also uses speech to direct the player on what is happening in the game.

Before beginning play, each play enters their name and then selects their face image, team image and team colors. The time per player can be chosen as 1, 3, or 5 minutes.

Available player face images and sporting team images are displayed as horizontally scrollable lists. The images in the sporting team list are the actual icons used by the professional sports teams. Both image lists may be hidden once player images have been selected.

Player 1 goes first, followed by Player 2. After each player's turn is up, their score for the period is entered. Also, after Player 2 completes his/her turn, a new period begins.

gbGameTimer displays a score box for each period. The number of score boxes displayed correspond to the sport being played (9 innings for based, 4 period for basketball, etc.). Players enter their score per period and gbGameTime adds up the total score for all periods.

What is done during the players allotted time is entirely up to the two players. At our house, my grandson Daniel and my wife (the grandkids call her Dado) play all of the various sports in out upstairs game room. The rules seem to vary day-to-day!

We display gbGameTimer on the bigscreen TV so that each player can see the available times and scores.

As a further example of how gbGameTimer might be used, when Daniel/Dado play baseball, the current player is at bat for the full alloted time. The runs scored by the current player are entered into gbGameTimer, then the next player gets a similar allotted time in which to score as many runs as possible.

Daniel/Dado have their own rules for each sport. gbGameTimer simply provides a fun way to track scores and time. When they used a wall clock to manage their time, there were always arguments - what time was it, who started it, did it get paused right, ...). gbGameTimer acts like an impartial umpire, making sure that everyone follows the agreed upon time schedule.

When you close gbGameTimer, the current session is saved, then restored/restarted when gbGameTimer is opened again. You do not have to take any other action - just close and open, and you'll be right back where you left off!

To select the face or team images for a player, double-click on "Player 1" or "Player 2", which will highlight the frame containing that player. Then, just click on a face image or a team image (from the face/team image lists which are displayed just below the player frames. The selected image will appear next to the player's name.

A variety of face images are provided in the "face" subfolder. Players can add their own images to that subfoler. gbGameTimer will resize the images to fit within the available space.

A separate folder is provided for the images of each sport. When a sport is selected by a player for a game (dropdown list to the left of the team images), the sport's team images will be shown in the horizontal image list.

The Show Images toolbar button can be used to hide the image lists (just to simplify the game screen). The next image shows the gbGameTimer screen with the face/team images hidden. 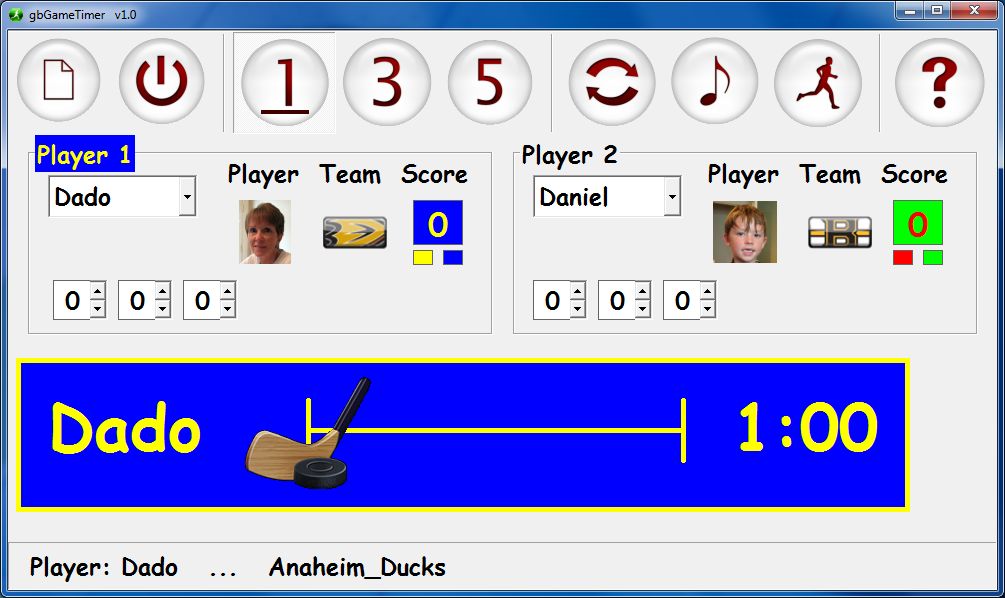 Three delays are built into gbGameTimer - one before each player's allotted time and one between periods. By default there are 30s, 30s, and 5 mintues. These values can be changed by the players. When a delay is in effect, the gbGameTimer screen looks like this, with the red delay dialog (with countdown timer) displayed over the gbGameTimer screen. 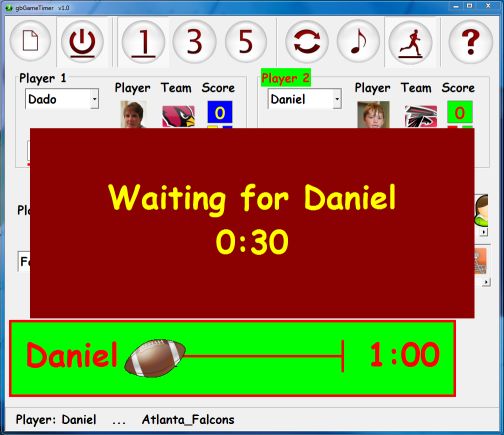 A visible delay may be skipped by pressing the ESC button or by clicking on the delay dialog.

Players must enter scores by pressing the up/down controls for each period. The total of all inning is automatically computed and is display just above the score boxes. When a new game is started, the scores are erased.

The following options are available from the toolbar.

The following key combinations are available to the user to access gbVisualDesigner features: