gbInstanceManager is a demonstration of how to manage instances within a PowerBASIC application. Limiting the number of instances, synchronizing menus, and closing selected instances are a few of the key features. The code does not lend itself to a single include file for incorporating the features into an application, but is modular enough that adding it to an application is quite easy.

gbInstanceManager is a demonstration of managing instances, so there is no real content to the main screen - just a single toolbar with a button dropdown menu which displays a menu that shows actions and settings a user may make. 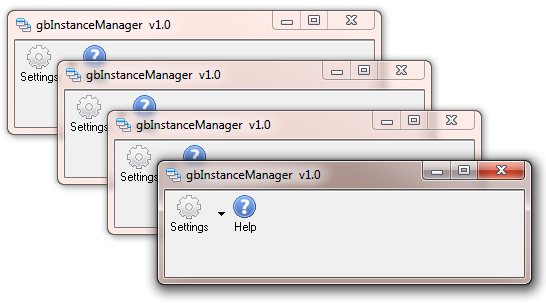 Here's the main window, with the various menu options dislayed. 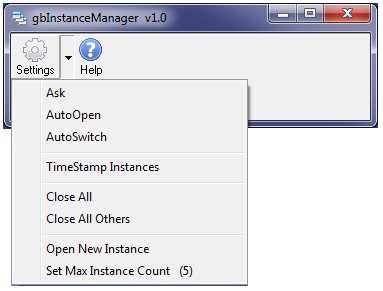 The dropdown menu is discussed below in the section on the Toolbar.

gbInstanceManager provides a variety of features to change how the word list is created, viewed, or modified:

Also, see the Programmers Notes below for information on source code that provides useful features that may not be on this list.

The gbInstanceManager toolbar is used only to provide the Settings button, and its attendant dropdown menu. Other than Help, the toolbar has no other buttons.

The following options are available on the toolbar.

Settings
Pressing the Settings button will open a new instance, as constraing by the instance settings. The dropdown arrow to the right of the Setting button is discussed in the next section.

A dropdown menu, with the following options, is associated with the toolbar Settings button.

Ask
Forces gbInstanceManager to ask the user each time a new instance is opened. Ask/AutoOpen/AutoSwitch are mutually exclusive settings.

AutoOpen
Opens a new instance, up to the maximum number of instances allowed, without asking the user for approval. Ask/AutoOpen/AutoSwitch are mutually exclusive settings.

AutoSwitch
Prevents the user from opening a new instance. Instead, displays and gives focus to the most recent instance. Ask/AutoOpen/AutoSwitch are mutually exclusive settings.

TimeStamp Instances
Adds, to the caption, the time an instance was started. Changing this setting changes all existing/future instances.

Close All
Closes all instances, include the instance in which the command was selected.

Close All Other
Closes all instances, except for the instance in which the command was selected.

Set Max Instance Count
By default, only 5 instances are allowed by gbInstanceManager. Use this option to change the default.

Here are some comments about the code, pointing out the reason why some of the code is written as it is. Code snippets are shown for reference, but please refer to the complete source code listing to get the full context of the examples.

Existence of Previous Instances
Identifying whether a previous instance of an application exists is done using mutexes. This line of code shows the basic approach:

gbInstanceManager takes the approach of using SetWindowLong() to assign an arbitrary LONG number to all instances. With 4G numbers to choose from, the odds of another app also assigning the same user value is acceptably low.

Here are the lines of code that support the assignment:

Synchronizing Menu Options
gbInstanceManager shows how to synchronize menu settings, in real-time, across all instances. The approach taken is to register a custom Windows message and use that message to send settings information to all instances. Instances which receive the message will update their menu settings to match.

Here are the lines of code that support registering the custom message:

Custom messages, like any message, allows sending of two LONG values. The comments in the code below describe the values sent with the custom message. The Select Case statements should the actual code that is run when a custom message is received. See the dialog callback function for more details.

Session Information
The location and size of the last opened instance is saved in an INI file. When a new instance is created, it reads the INI file and opens in a staggered position from the last instance.

The "get" of location/size information is done only once - when the instance is started.

The "save" of location/size information, for the active instance, occurs with three events:

- Close All Other
- New Instance
- WM_Destroy

Options Management
The INI file is also used to store the Ask/AutoOpen/AutoSwitch and TimeStamp settings. Because it is necessary to save these settings at the moment an instance changes the settings (so the instance can synchronize its menu settings), the Settings_INI "get"/"save" code is not used. Two custom procedures, GetInstanceSettings and SaveInstanceSettings are used instead. These only modify the INI to update the properties just mentioned.

GetInstanceSettings is used once during a session, when creating a new instance.

SaveInstanceSettings is used each time the Ask/AutoOpen/AutoSwitch or TimeStamp settings are changed in an instance. That makes the values available to future instances.

Small InputBox$
The problem with a standard input box it that it is so ugly! The programmer has little control over what it looks like. But with the following code, you can make it look much nicer, like this:

with this supporting procedure:

Locate MsgBox to point of use
The standard MsgBox$ does not allow you to place its window in a specified position. But with hooking you can put it anywhere you want. You can center it in the parent dialog or simply place it where the mouse clicked the menu option, which is what I do in gbInstanceManager.

and use this supporting procedure:

Misecellaneous information is provided in this section.