gbSudoku is a version of Sudoku, usually described as a number-placement puzzle. The objective is to fill a 9x9 grids with only the digits 1-9, in such a way that no row, column, or "box" (more on that later) has the same number twice. A number of the grids are pre-filled with characters (sometimes called "seed" characters) and it is the player's task to fill in all remaining grids consistent with the rules of placement.

Sudoku games are available online and are carried by a number of magazines and newspapers. By carefully constructing the puzzle, varying levels of difficulty are possible.

gbSudoku can generate Sudoku puzzles and provides a variety of features to make it easy for the user to play the game. 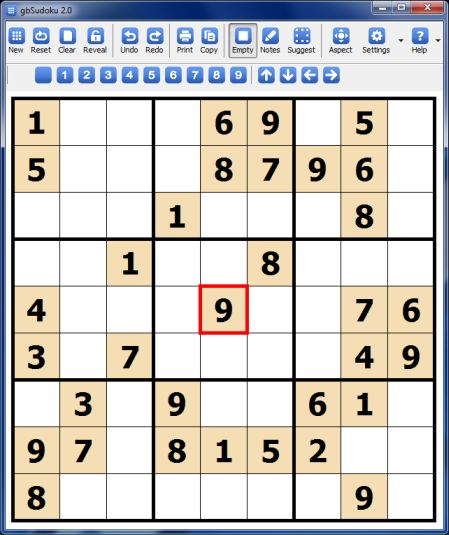 gbSudoku uses a single main window, consisting of two toolbars and a client area where the game is played.

gbSudoku provides a complete selection of features for playing the game:

Future versions will provide saving/restoring multiple games, selecting level of difficult, and adding skins to the game GUI. Undo and highlighting of rows/columns/boxes for which a number entry is invalid is also on the list of future enhancements.

When first started, gbSudoku generates a new game. To play the game, select a cell and then select a number (from the toolbar keyboard or by dragging the mouse in a selected cell) to insert into the cell. If the number is a valid entry, it is displayed in the cell. If the number is invalid, the game beeps and makes no changes to the game screen. Game alerts and messages are optional.

Only numbers 1-9 may be displayed in a cell. Press the space button on the toolbar or the number zero from the keyboard to remove the number from the currently selected cell.

When all cells are filled, a sound effect (or voice congratulations) will be played.

If gbSudoku is closed, the current game is save and restored when the gbSudoku is next opened.

The user can navigate to a new cell by clicking on the cell or by pressing the up/down/left/right toolbar buttons.

The Suggest toolbar button toggles the display, in each cell, of all numbers which may be entered into that cell.

When pressed, the blank button removes the number from the selected cell. A space will do the same thing. Numbers on the keypad or across the keyboard may be used.

The left/right/down/up arrows keys are used to move to a new cell and select that cell. A mouse click may also be used to select a new cell.

In compact toolbar mode, gbSudoku removes several toolbar buttons (the commands are also in the Settings dropdown menu or in the game context menu) to allow the user to create a smaller sized game. 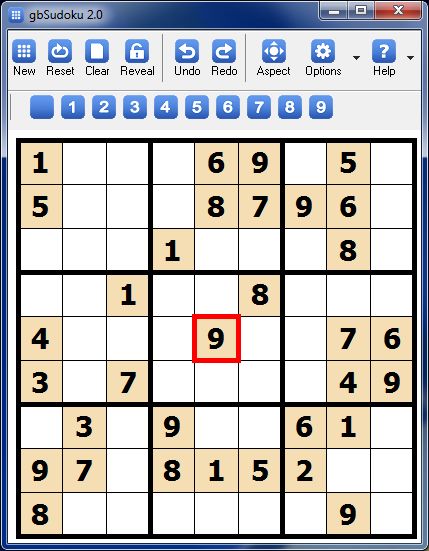 From the top toolbar, the Empty/Notes/Suggest/Print/Copy buttons are removed.

From the bottom toolbar, the Up/Down/Left/Right arrow buttons are removed.

The following context menu is available by right-mouse clicking over the game area.

The context menu has the following menu options

The following key combinations are available to the user to access gbSudoku features: Also, the keyboard and keypad numbers zero through nine act the same as the corresponding number button on the bottom toolbar.